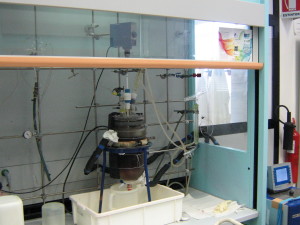 The project has the following technical goals:
_ Elimination (100%) of chemical additives as dispersing agents and surfactants from the synthesis
output of dyes.
– Elimination (100%) of auxiliary chemicals which are present in traditional dyes since naturalised
dyes do not contain any of those chemicals
– Treatement of dyeing effluents during the pilot experimentation as 45-50% of the total retannigdyeing
process (ca. 3.0 m3).
– Reduction of water consumption on a preindustrial scale from 50 to 75% of the volume of 1.4 m3
employed in the dyeing phase
– Reduction of the COD and BOD parameters by 40 to 50% of the value of standard dyeing effluents
– The volume of milk serum needed to produce the required amount of lactose employed in the
synthesis of a naturalised dye, is in the range of 35-36 L per Kg of colorant. This volume would grow to
ca. 640-860 L of milk serum for the production of lactose needed in the manufacture of naturalised
dyes foreseen in Action B.6. and Action B.7. altogether.
– Considering the production of 9 million Tons of hides worldwide, a plausible projection would mean
that about 3.0 million Ton of milk serum would not be released into the environment, but used to
obtain ca. 120000 Ton of lactose for the manufacture of naturalised dyes on a global scale.
_ Increased (100%) purity of naturalised dyes compared to commercial dyes.
_ Reduction (80-100%) of lactose disposed of in the environment from waste milk serum.
_ Less (70-100%) pollutants in dyeing wastewaters.
_ Increased (70-100%) biodegradability of dyeing wastewaters.
_ Recycle (100%) of bacteria biomass for further wastewaters purification.
_ Increased (20%) penetration of naturalised dyes into leather.
_ Increased (20%) efficacy for dyeing homogeneity.
_ Increased (10-15%) bath exhaustion.
_ Improved (15-20%) quality for the dyed leather using finishing protocols.
_ Improved (50%) purification of dyeing effluents using E. Coli bacteria.
_ Reduction (40-50%) of COD and BOD of dyeing wastewaters.
_ Recycle (70-80%) of purified wastewaters (e.g., for further dyeing).
_ Reduction (40-50%) of water consumption.
_ Reduction (20-30%) of energy consumption.
_ Demonstration of the synthesis of naturalised dyes from the lab-scale to the kilo-scale.
_ Substitution of commercial acid dyes.
_ Optimization of colorant formulation to dye leather according to trichromy.
_ Improving leather quality by means of appropriate finishing protocols.
_ Purification of dyeing wastewaters using E. Coli bacteria technology.